How does a Rider Keep a Bike Balanced?

The most important skill a young rider needs to learn to ride a bike is balance.  Everyone who knows how to ride a bike necessarily knows how to balance it.  But can you articulate exactly what you do to keep a bike balanced?  For the purpose of this article, we're going to focus on one big question:

How does a rider balance a bike?

There are also effects that assist the rider, including the gyroscopic effect of the wheels and the steering torque effect of rake[1].  But, neither of these effects is directly responsible for keeping the bike upright.  And since we're interested on what it is that the rider is doing to keep the bike balanced, we're going to ignore these effects.

A rider balances a bike by steering.  More accurately, a rider balances a bike by using steering to constantly generate centrifugal force in a way that counteracts the gravitational force pulling the bike over.  If that makes perfect sense to you, you can stop reading - you have graduated.  If that only kind of makes sense to you, or if you are totally confused, no worries.  We're going to break this down nice an easy.  And if you are still with me, good news:  pictures are coming up

There are two forces we want to focus on here:

Gravity:  This one is easy to understand.  When you stand a bike up, let go, and it leans and falls to the ground, it's gravity that caused the handlebars to collide so impolitely with the earth.

Riding a bike is about keeping these two forces in balance.  Unless the mass of the bike is perfectly centered over the wheels (hint: the mass is essentially never perfectly balanced) gravity will always be leaning the bike towards the ground and the rider must constantly be counteracting these leans by turning the bike and generating centrifugal force in the opposite direction of the lean.

Illustration of a Rider Using Centrifugal Force to Counteract Gravity

For the purpose of this illustration, we'll start with a bike that's straight up and down and traveling in a straight line. Rider is Back Upright

When centrifugal force is greater than gravity, the bike moves back upright.  Good job rider!  You showed gravity who's boss!

What's the takeaway from this?

When a person rides a bike, this balancing act between centrifugal force and gravity is ongoing. The rider is constantly correcting for lean. The rider's brain is making very rapid and precise adjustments without the rider consciously thinking about it. The ability to make these constant precise adjustments to maintain balance is the essential skill that young riders need to learn.

Once you learn how to balance a bike, it happens without thinking.  It's as intuitive as walking.  Because balancing a bike feels so intuitive, sometimes we forget how frustrating it was to learn the skill in the first place.  If we (1) empathize with the frustration of learners and (2) understand the mechanics of bike balance, then we can start to make changes to the way that we teach kids to ride that will make the process less scary, more fun and easier.

[1] Rake serves to help the bike self correct since it causes the bike to turn in the direction of lean. Similarly, the gyroscopic effect of the front wheels exerts a force that turns the front wheel towards lean. So rake and gyroscopic effect both assist the rider in turning into lean and generating centrifugal force that counteracts gravity. Neither rake nor gyroscopic effect alone keep the bike upright. And bikes can be ridden with zero rake and with gyroscopic effect canceled out. But bicycles cannot be ridden with steering locked. If you want to learn more about this I recommend reading Bicycling Science (MIT Press), by David Gordon Wilson. Or we can have a nice internet debate about this in the comment section - just keep it civil, this is a kid's bike company. 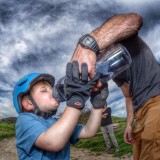